Find this article at:
go.ncsu.edu/readext?761211
— Written By Tiffanee Boone 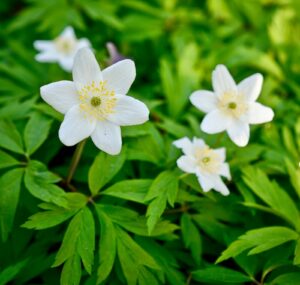 Native plants are those which can naturally be found and which grow in a specific geographical area for a long period of time. They are plant species that have naturally evolved in an ecosystem like trees, plants, and grass. North Carolina is blessed to have different varieties of native plants found therein. Many times, they get overlooked, but they have significant characteristics. One of these native plants is the Wood Anemones.

Anemonoides quinquefolia commonly known as Wood Anemone or Windflower, is a spring-flowering plant in the buttercup family and is native in North America. It is said that the flowers are opened by wind, hence the common name, Windflower. It is often confused with Anemonoides nemorosa, a species that is native from Europe. It is a delicate perennial herbaceous plant with three leaves. Wood Anemone has deeply lobed lateral leaflets, giving the appearance of five leaflets. The leaflets appears to be prominently as five leaflets when Carl Linnaeus named Anemone quinquefolia in 1753. Thus, the epithet quinquefolia, meaning “five-leaved”.

They often grow in colonies and are found in forests that have moist and rich soil. The flowers of Wood Anemone are usually white but can have variations of pink or pink base with bluish tips. Wood Anemones are known to have a shorter flowering season. Thus, this species in general have been associated to Ancient Greeks as a symbol of early death. They are likewise known to be plants of evil in European countries. Anemones contain a compound called anemonin which is poisonous but was formerly used medicinally. They were used for preventing fevers and applied to bruises and freckles.

Looking for our email lists?

We have a list of all of our e-mail newsletter offerings.