Find this article at:
go.ncsu.edu/readext?761164
— Written By Tiffanee Boone 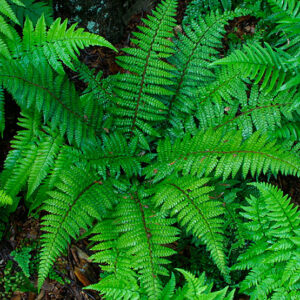 Polystichum Acrostichoides, commonly known as Christmas Ferns, from the Dryopteridaceae family, are often associated for its ornamental cultivation. They are used as decoration which are usually for showy purposes such as landscaping since it is available all year long and it remains green. Its number has been increasing because of its easy propagation properties, which is through the production of spores. However, plants like ferns are more than just for aesthetics. It can be said that there’s more to it than meets the eye and provides certain benefits to our health.

Christmas ferns have medicinal use. They were used before by the North American Indian tribes to cure different illnesses. They have been used to treat fever, pneumonia, stomach problems as well as rheumatism, and even as a blood purifier. They are often made into medicinal tea and the young fronds can be eaten when cooked.

Christmas ferns help prevent erosion. It is said that because ferns easily propagate and grow in massive clusters, it helps cover and stabilize the ground. Thereby, helping in the prevention of soil erosion, especially in slopes. When the leaves of ferns or commonly known as fronds fall off, they pile up and the gradual decay thereof helps build the soil.

They also help provide habitat to other organisms. Since ferns provide covering and grow in sets of two to three clustered individuals, they help camouflage other animals and ground feeding organisms away from their predators. Christmas ferns are so much more than decoration!

Looking for our email lists?

We have a list of all of our e-mail newsletter offerings.