Find this article at:
go.ncsu.edu/readext?755940
— Written By Tiffanee Boone 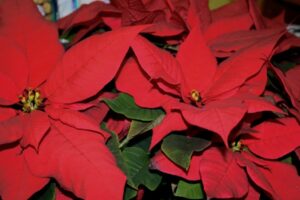 When we speak of holiday plants, these are among the most popular that come to mind: Poinsettia, Mistletoe, and Christmas Cactus. Some may have wondered how they came to be the symbol of Christmas.

Poinsettia originated from Southern Mexico and was named after Joel Roberts Poinsett, the first U.S. ambassador to Mexico in the 1800s, who brought the specie to the states. The bright red part which are usually mistaken as flowers are actually leaves. That is why it used to be known as the “painted leaf”. It’s flowers are yellow to green at the center of the plant.

This plant has become of great significance during Christmas season, because the legends say that a poor girl had nothing to offer for the holidays and so an angel appeared before her. She was told to grab the weed which she offered and it turned to the bright red color. Accordingly, it symbolizes the blood of Christ.

Mistletoe has become the holiday romantic symbol due to the kissing custom associated with it. Mistletoe is a parasitic plant that lives on trees. As such, it steals the nutrients of its host plant. While today it is more known because of romantic tradition, it used to be popular as a healing herb thousands of years ago. It has been known to exist for a long time and has been deemed to be essential to a healthy ecosystem.

It is said that in Norse Mythology, Odin’s son Baldr dreamed of his early death. His mother, Frigg, in turn asked all the animals and plants not to harm Baldr, only the mistletoe. Loki, the trickster God, shot Baldr from the mistletoe. He could not be revived for days but was only resurrected through the power of Frigg’s tears. She was overjoyed that she made mistletoe the symbol of love and hope, and everyone who passes under it should receive a kiss.

Christmas Cactus came from the coastal mountains of southeastern Brazil. This plant belongs to the genus Schlumbergera.

Its tale is said to be that a missionary priest named Father Jose went to Bolivia to spread Christianity. However, despite his good works, the people still did not believe in Christmas. He was praying at the altar on Christmas Eve when he heard the people singing the song he had taught them and children coming his way were bringing flowers. These flowers are what we know now as Christmas Cactus. This plant symbolizes faith and hope.

What to do With Plants After the Holidays

The Legends and Traditions of Holiday Plants