Our Staff will be out of the office on Oct 3,4, 5 for educational training. We will have limited access to voicemail and email.

Can Too Much Mulch Kill Plants?

Find this article at:
go.ncsu.edu/readext?185833
— Written By Charlotte Glen and last updated by Melissa Massing

Are you your landscapes worst enemy? Is your motto, “If a little is good, a lot is better”? If so you may be killing your plants with kindness, especially when it comes to mulch. While all plants grow better with mulch, too much can kill them. The secret to nurturing a healthy landscape is to know when enough is enough. 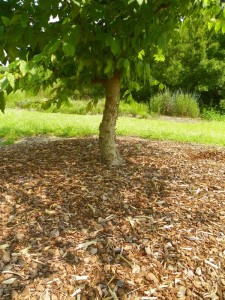 Two to four inches is the ideal depth for mulch around trees and shrubs.

Fall is the time many gardeners add a fresh layer of mulch to their landscape. This year, before topping up your beds, first measure how much mulch is already there. A two to four inch layer is ideal, and provides many benefits to plants. These include weed suppression, moisture retention, and the slow addition of organic matter to the soil as the mulch decomposes. Another important benefit of mulching around trees and shrubs is that it keeps mowers and weed trimmers away from their trunks, which can be easily damaged by such equipment.

Since mulch does so many good things, it is easy to think more would be better. In reality, thicker layers of mulch harm plants. When mulch builds up over four inches it often becomes hydrophobic, or water repellent. When this happens water simply sheds off the top of the mulch rather than soaking in to the soil below, leaving plants thirsty. Thick layers of mulch can also suffocate plant roots. We don’t often think about the role of air in the soil, but roots need air to survive. Burying root systems under excessive layers of mulch reduces the amount of air in the soil, causing plants to decline. This decline is usually slow, often taking years for plants to die from over mulching.

If you already have a four inch layer of mulch on your beds but wish to add more to brighten up the bed’s appearance you have two options. One is to remove part of the mulch that is already there before adding new mulch. You can add the old mulch to your compost pile or use it as an under layer for new beds. The other option is to just stir up the mulch you have. Often only the top layer loses its bright appearance and if you mix the mulch up a bit you will bring some of the more richly colored lower layers to the surface.

Especially harmful is the practice known as volcano mulching, where deep layers of mulch are piled up against the trunks of trees. In addition to suffocating roots, this type of mulching encourages voles and other pests. If your trees look like they are erupting out of a mountain of mulch, you have volcano mulch. To protect the health of your trees, pull excess mulch away from tree trunks. Ideally there should be a two to four inch layer of mulch extending out to the dripline, or edge of the tree canopy. Taper the mulch level down near the trunk so no mulch actually touches a tree’s trunk. Also avoid piling mulch into the center of shrubs or dumping thick layers of mulch on top of perennials.

Another common mistake is to treat mulch like a soil amendment, mixing it into the soil when you plant. Soil amendments like compost or finely ground pine bark have already broken down into small particles. When mixed into the soil, they slowly release nutrients, help retain moisture and also improve drainage. Most mulches are too coarse to make good soil amendments. This is especially true of hardwood mulches, pine straw, and pine nuggets.

If mulch has become mixed with soil, dig down until you find pure soil in which to plant.

Often mulch and soil are mixed together by accident when new plants are set out. Over time, you can build up a layer of mixed soil and mulch that is several inches thick. Plants typically do not grow well in this mix because it stays too dry and because the decaying mulch actually pulls nitrogen out of the soil through a process known as nitrogen drawdown. To avoid mixing mulch with soil, always rake mulch away from the area before planting. If you have beds where mulch has become mixed with the soil, rake down to the soil level and be sure to plant into soil rather than mulch.

Learn more about the dangers of over mulching from these online resources:

Visit your local Cooperative Extension office to learn more about gardening and landscape care. Go to